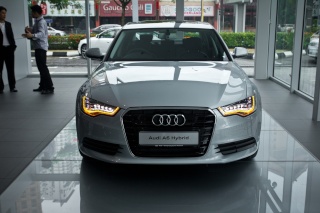 The Audi A6 Hybrid Forum

Comfort when you want it, Power when you needed it!

The Audi A6 Hybrid Forum :: All about the A6 Hybrid :: Hybrid Driving Tips & Fuel Consumption

Here's an interesting find on my part. If you start your car up on battery power alone then open the door, the engine will come on regardless of what your charge is. Of course, the door alarm would be chirping away as well.

Just found out another characteristic. If you put the gear into neutral when idling, the charging stops too.

I think its the ECU making the decision based on the conditions of traffic and driving style. Assuming you are in a stop go traffic situation, based on your right foot jabs at the accelerator, it may assume that the situation may be prolonged for a period. As such, it charges itself up so that you can then pulse lightly ahead on battery power. Just a guess.

I've experienced it once or twice only...but do turn off the ev mode after that

Will try that. Thanks Screw.

Did you have similar problem?

Overall my Long Term fuel consumption for 4000km is clocked at 11 litre/100km.

Thanks for the info and tips.

Still having a issue with when the car is idle, no autopark-Auto Mode, Leg on brake and gear in D.
The engine usually cuts off. Noticing now at times it's Engine is running, battery level at 30-40%. It keep on charging till 70% or at occasion 80%.

Maybe I am comparing it to Prius, just don't get the logic of the car trying burning fuel to recharge battery.

I think I may have found the source of your high fuel consumption.  It's your  tracking.  Don't track FC with the short term memory.  Use Long term instead as you can very easily average up your mileage in a hybrid by doing anticipatory driving like coasting, gliding regen braking etc.  the hybrid achieves its good FC over a period of time and not stop-go-start situations.

What I do when I want to do hybrid driving style is to display the histogram bar chart on the MMI while at the same time, showing car's driving and charging state on the speedo display (the similar but smaller car icon).

The histogram chart will show me the immediate 5-minute interval fuel consumption and charging rate.  What you want to achieve here in a nutshell, is to get lower orange bars while correspondingly longer green bars.. This indicates that for the last 5 minutes of driving, you have used the least amount of fuel whilst having the batteries charged with hybrid techniques like coasting, gliding etc ie you are not using fuel to charge your batteries.  How do you know you are not using fuel to charge the battery?  I then refer to the car icon on the cockpit display to glide my way without engine intervention.

As for your over zealous charging problem, I guess the ECU learns over time your driving style and then conditions.  To me this is not a problem, if it charges itself on idle and battery level is healthy, expense that with a glide technique for the next leg of your drive OR if you are continually stuck in stop-go traffic, to lightly pulse the car forward without invoking the engine.  You can then average up your mileage from the earlier over zealous charging.

My friend who's a member here has done 4k km on his A6h, his long term average per tankful has been between 9 to 10.5l/km  per tankful and that involves many heavy traffic situations in the city.  Under similar situations, he was doing 15+l/100km on his 323i

Assisted braking is the A button below the parking brake button, the feature that allows you to lift your foot off the brake in stop go traffic.

Dynamic boost assist is driving in dynamic mode and pushing the power meter all the way to boost level.  Gives you an idea on how the KERS system works on the F1. Exhilarating!!

Nowadays, after break in, I seldom drive hybrid style but occasionally when the  situation presents itself, I'll like to glide the car.  Its a very tricky and challenging but a hugely rewarding move to be able to pulse lightly and see the car moving at 100kmh without sipping a trickle of fuel.  I treat it as a game.

Summary, track your FC with the long term memory and remember that you can make up for bad mileage in stop go driving by using hybrid style coasting and gliding.

G'day, thanks for the tips, a few items to learn on my hybrid...

(esp on the dynamic/comfort charging difference)

The charging part is more extreme after the 1500km break in period...
Even battery level at 30+%, the engine will keep on running when idle to charge up to 70%++. Which I find weird and its pushing the fuel consumption to beyond 14l/100km

Q: What is assisted braking? & dynamic boost assisted mode? Thanks in advance.

Mileage in highway on the short trip memory function is below 8l/100km, but the moment it hit town traffic, the audi keep trying to recharge the battery to beyond 50% when idle or stopped. (ps- have not tried the P position while waiting in traffic, will test that out)

Incidentally, I have a Prius C which seems to be operating more sensibly cutting off engine recharge when battery is over quarter full. Even in start stop traffic for the prius, fuel mileage is at an impresssive 18km/l

I think it's pretty normal. I find this overzealous charging as you call it, to usually happens in the first 10-15 minutes of driving. After the engine warms up, charging stabilizes to normal efficiency .

Could be attributed to a few reasons,
If you do frequent short trips, the ECU invokes a new cycle of engine driven charging of the batteries. Therefore, if you are stopping for a short period, put into Park and let it idle on battery until it's drained. Restarting will invoke a new cycle of with the engine being the primary source of power.

- regenerative charging in comfort mode is too subtle in that it charges the battery more slowly. As such, regular stop go traffic will very quickly deplete the batteries and thus require engine intervention again. The key here is to make up for lost fuel by invoking hybrid driving techniques to average up your mileage eg coasting, pulse and gliding, regenerative braking above 20kmh (as below that mechanical braking takes over and energy is lost and not stored)

As for your morning starts, it's also normal for it to start on battery but once you move, engine takes over until the car is warmed up. The batteries will not move on cold engine.

Lastly, I also notice that driving in dynamic mode charges the batteries much faster even in coasting or gliding compared to comfort mode

Noted that engine recharging is almost none.

After the break in...
My a6 engine keep on running when stopped to charge battery. Even if its 30%mark. Engine kept recharging when idle to past 50%mark and at times 75.
Previously engine rarely starts when I wake it in the morning
, now the engine runs even when the battery is at 30+ percent when starting in morning.

Anyone with similar experience?

The Audi A6 Hybrid Forum :: All about the A6 Hybrid :: Hybrid Driving Tips & Fuel Consumption